Importing a Drawing Document (or Folder)

In addition to be being able to open native TouchDraw 2 documents, TouchDraw 2 also has support for opening other file types. The list of supported file types are:

Files may be accessed and imported into TouchDraw 2 using one of two methods:

Drawing documents can be opened directly from a parent directory outside of the local device storage and can be copied or moved from other parent directories to local storage.

For example, if a TouchDraw 2 drawing is received via an email message, tap on the drawing document to open the preview pane and then press to view more options.

Touch and Drag to the right in the pop-up window. Then press on the More (…) Button.

Finally, tap on the Copy to TouchDraw 2 option in the menu. The file will be converted to the TouchDraw 2 format and opened within the Drawing Editor. 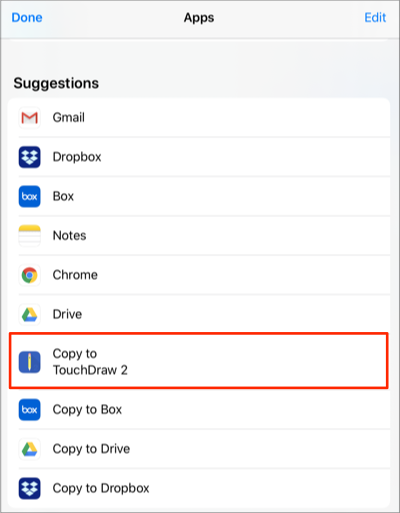 Note: The steps will vary per application when importing a drawing from a third party application.